Declining COVID-19 cases and the economy

Declining COVID-19 cases and the economy

Australia is continuing to see new coronavirus cases remaining low and deaths continuing to fall. Unfortunately, the decline in new cases in Victoria may not be fast enough to see the move to Step Three of the reopening by 19th October. NSW has also seen a spike in new community transmission cases, further delaying a reopening of the Queensland/NSW border. 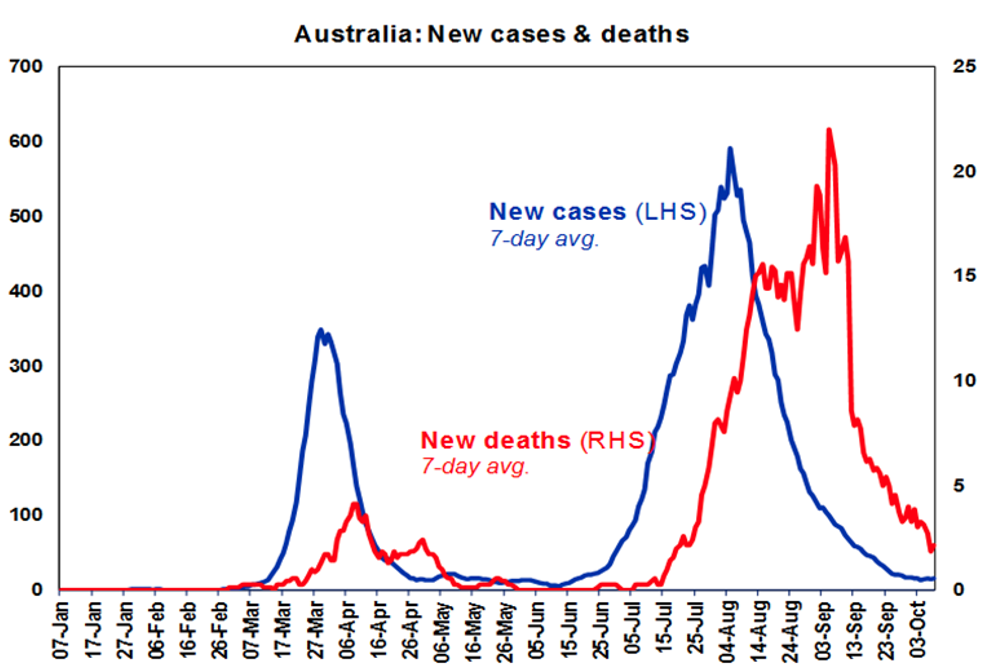 The decline in new cases has seen our Australian Economic Activity Tracker continue to hook up from August lows with gains over the last week in consumer confidence, restaurant bookings, traffic, credit card transactions and mobility. Expect the trend to remain up as Victoria gradually reopens and other states continue to recover. 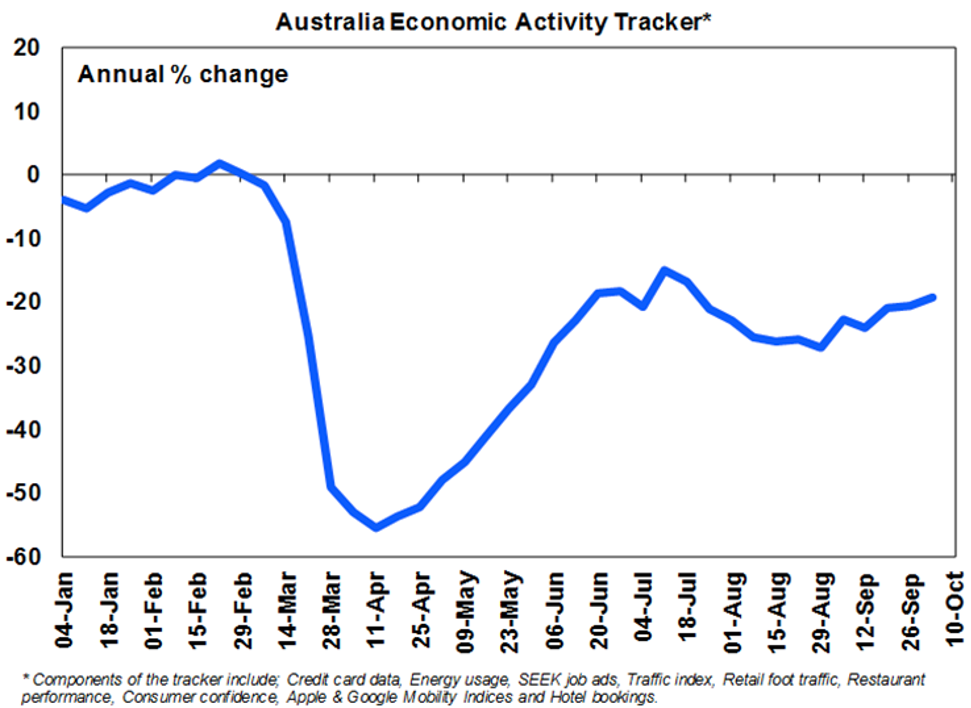 It might have been hoped that President Trump’s coronavirus infection would lead to a more sensible US response to the virus. Particularly after he said he “learned a lot” about it. But his actions over the last week - the drive-by for fans, the early return to the White House when likely still contagious, the defiant show of removing his mask at the White House balcony, his tweet that coronavirus is less deadly than the flu, etc, at a time when multiple members of his team have become infected - suggest no such thing. And it went crazier when early in the week he tweeted that a fiscal stimulus deal needs to get done, only to then a day later put negotiations on hold till after the election (despite Fed Chair Powell warning of “tragic” risks for the economy) but then do a back flip on the back flip proposing a piecemeal approach (perhaps after some of his team reminded him that he has more to gain from a deal than the Democrats) only to then shift back towards supporting a comprehensive stimulus package after Democrats rejected the piecemeal approach and on Friday say he now wants a bigger package than the $2.2trn the Democrats are proposing which was then contradicted by other comments from the White House! Maybe Trump is starting to get desperate. Even if the White House now wants a bigger package there are still big differences over where the money is spent and its not clear that many GOP Senators will support a bigger package and whether it can all be done before the election. So, who knows where this ends up in the next few weeks. The good news in all this is that Trump would have been given the absolute best available coronavirus treatments and so his seemingly speedy recovery holds out hope for many others who catch it. It’s interesting that Trump relied on experts (doctors) to fix him rather than some of the things he has advocated over the last six months (like injecting disinfectant)!

For what it’s worth Trump’s infection doesn’t seem to have provided him with a sympathy boost in the polls. In fact, he had a bad week. Biden’s average poll lead has risen to 9.6 points, his average poll lead in battleground states has widened to 4 points, Trump’s approval rating has fallen over the last week to 44.5%, and Biden’s lead on the PredictIt betting market is now about 31 points from 12 points before the debate. That said, there are still 3 weeks to go and “shy voters” for Trump could still swing things around. 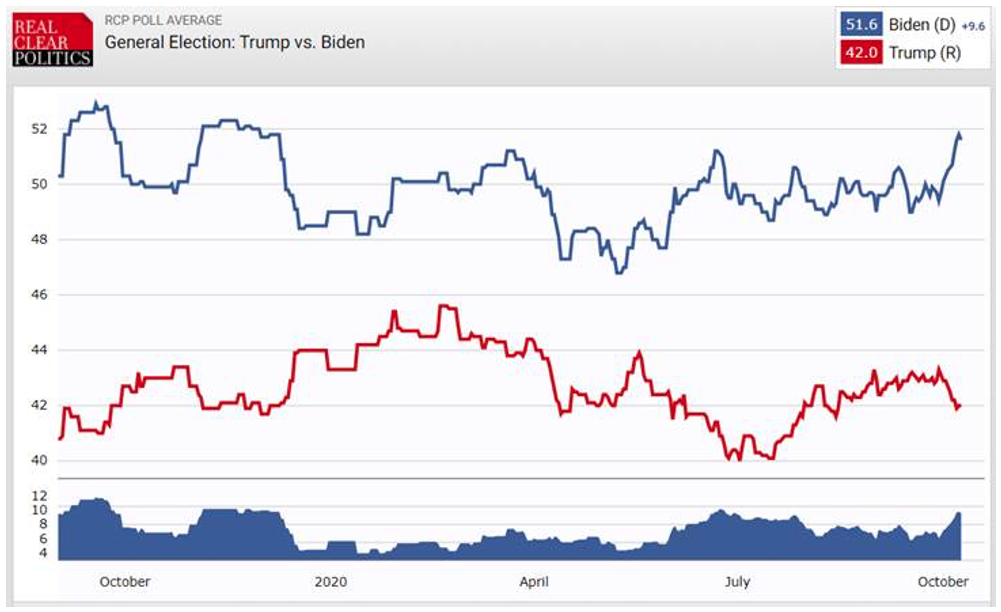 While a Democrat clean sweep has gone from 50/50 to 58/42 on PredictIt its surprisingly not causing the nervousness in share markets that might have been expected given that it would clear the way for higher taxes and regulation under Biden. This is perhaps because a Democrat clean sweep would also clear the way for more stimulus (after the on again off again mess under Trump) and lead to smoother policy making. Its also worth noting that because new Democrat senators would likely come from conservative states, they would be unlikely to go along with any extreme leftwards policy lurch.

Australian data was mostly good. While the trade surplus surprisingly weakened in August this reflected a fall in exports due to a sharp fall in gold exports which can be volatile and a recovery in imports which is consistent with stronger demand in the economy. Meanwhile business conditions and confidence improved in September according to the NAB business survey, job ads rose again in September and payroll jobs rose over the two weeks to 19th September suggesting the payroll jobs recovery may be resuming after a flat period since July due largely to Victoria.

Housing finance commitments surged another 12.5% in August with owner occupiers and investors seeing strong increases and an 18% rise in finance for first home buyers. The surge in housing finance partly reflects a catchup to the low processing of loans in April and May but is also being driven by record low rates and various incentive schemes and is occurring before the removal of responsible lending rules. The surge in housing finance taken in isolation points to a potential surge in house prices. Working against this though are a likely increase in distressed sales as bank payment holidays and various income support measures end and the huge reduction in underlying demand flowing from the collapse in immigration. 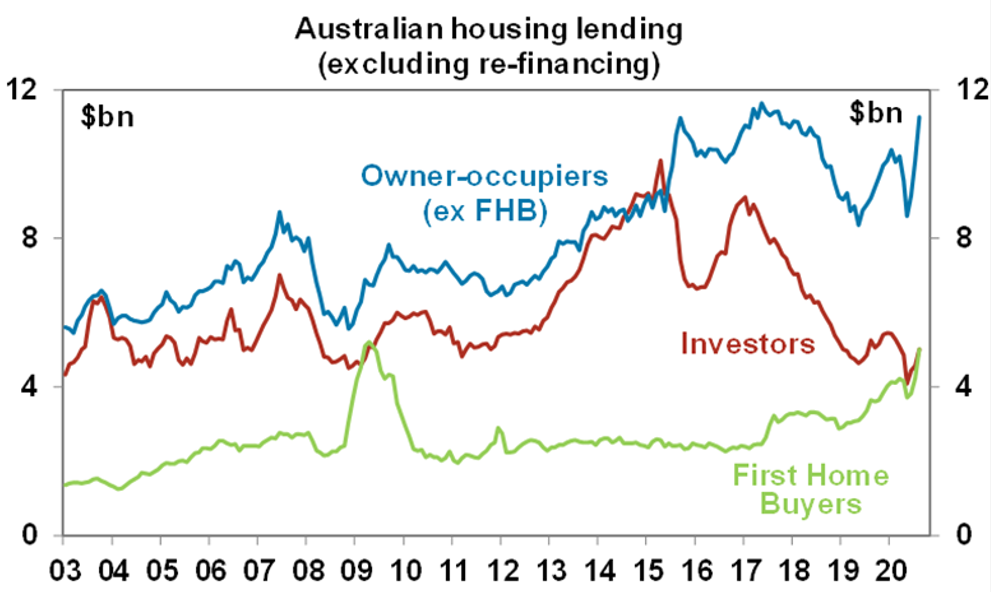 The RBA’s latest Financial Stability Review noted that the Australian financial system can withstand the downturn and support the recovery, but that “business failures will rise substantially” as loan deferrals and income support end and that while the finances of most households are faring well “the number of households in financial stress has increased and will increase further.”

While the RBA left the cash rate on hold at its October meeting it strongly hinted at further easing to come by noting that it “continues to consider how further monetary measures could support jobs as the economy opens up further.” Our base case remains that the RBA will cut the cash rate, the Term Funding Facility rate and the three-year bond yield target to 0.1% and will likely do this at its November meeting after it has updated its forecasts which will likely show that its employment and inflation objectives are still not going to be met over the next two years at least. Over the next six months we also see the RBA moving towards inflation average targeting and therefore tweaking its forward guidance to say that it won’t raise the cash rate until full employment is reached and inflation is sustainably within the 2-3% target band. And we also see it adopting a more traditional quantitative easing program extending bond buying beyond the three-year bond.

What to watch over the next week?

In the US, expect to see continued strength in the NFIB small business survey (Tuesday) and in NY and Philadelphia regional manufacturing conditions indexes for October (Thursday) and solid gains in September retail sales and industrial production (Friday). Expect to see a 0.2% rise in core CPI inflation (Tuesday) taking the annual rate to 1.8%yoy, which suggests core private consumption deflator inflation of around 1.5%yoy. September quarter earnings reports will start to flow with consensus expectations for earnings to fall by -22% year on year, up from -32%yoy in the June quarter.

Chinese data is expected to show export growth running around 9.5% year-on-year but imports about flat (tomorrow), a fall in headline inflation (Thursday) to around 2%yoy and continuing solid growth in credit.

In Australia, expect a rise in consumer confidence (Wednesday) on the back of the tax cuts and extra stimulus in the Budget and October jobs data (Thursday) to show a flat employment and unemployment rising to 7% reflecting a further recovery in participation. A speech by RBA Governor Lowe (Thursday) will be watched closely for any clues regarding further monetary easing.

Shares remain vulnerable to further short-term volatility given uncertainties around coronavirus, economic recovery, the US election and US/China tensions. But on a 6 to 12-month view shares are expected to see good total returns helped by a pick-up in economic activity and stimulus.

Low starting point yields are likely to result in low returns from bonds once the dust settles from coronavirus.

Unlisted commercial property and infrastructure are ultimately likely to benefit from a resumption of the search for yield but the hit to economic activity and hence rents from the virus will weigh heavily on near term returns.

Australian home prices at present are being protected by income support measures and bank payment holidays but higher unemployment, a stop to immigration and rent holidays will push prices down by another 5% into next year. Melbourne is particularly at risk on this front as its Stage 4 lockdown has pushed more businesses and households to the brink.

Although the $A is vulnerable to bouts of uncertainty about coronavirus, the economic recovery and US/China tensions, a continuing rising trend is likely to around $US0.80 over the next 6-12 months helped by rising commodity prices and a cyclical decline in the US dollar. Eurozone shares rose 0.4% on Friday and the US S&P 500 gained 0.9% helped along by hopes for more US fiscal stimulus with Trump now saying he wants a bigger fiscal package than the Democrats. Despite the positive global lead ASX 200 futures fell 5 points, or 0.1%, pointing to a pretty flat start to trade for the Australian share market on Monday.

Dr Shane Oliver is Head of Investment Strategy and Chief Economist at AMP Capital. This information was produced by Switzer Financial Group Pty Ltd (ABN 24 112 294 649), which is an Australian Financial Services Licensee (Licence No. 286 531). All prices and analysis at 12 October 2020. This material is intended to provide general advice only. It has been prepared without having regard to or taking into account any particular investor’s objectives, financial situation and/or needs. All investors should therefore consider the appropriateness of the advice, in light of their own objectives, financial situation and/or needs, before acting on the advice. This article does not reflect the views of WealthHub Securities Limited.

Will Qantas, Webjet and Flight Centre come back to glory days soon?

Here are James Dunn’s views on 3 travel stocks that have been slammed by Covid-19 and which one to buy.

My three favourite stocks with a good one-year outlook

Tony Featherstone on which banks he favours

Is it time to buy the big four banks?

Is tech the new defensive sector?