Westpac and nab capital notes worth the risk?

Westpac and nab capital notes worth the risk?

Shareholders in NAB and Westpac are receiving postcards inviting them to consider investing in their latest issues of capital notes. These are hybrid securities, a cross between debt and equity securities a bit like the Toyota Prius Hybrid is a cross between petrol and battery technology.

They have “debt” like features in that they pay a regular, quarterly distribution and if all goes well, like a bond, you get back your original $100 investment. The “equity” components are that your capital is potentially at risk and in certain circumstances, is converted into ordinary shares. Further, it is classified as capital by the issuing bank, and like a share, hybrid securities trade on the ASX.

But is the extra return worth the risk?

Let’s start with the return on the capital notes first. The current offers are paying a fixed margin of 3.4% pa over a benchmark interest rate. The latter is the 90 day bank bill swap rate (90 day BBSW) which is currently around 0.05%. The chart below shows how this rate has fallen over the last 10 years. 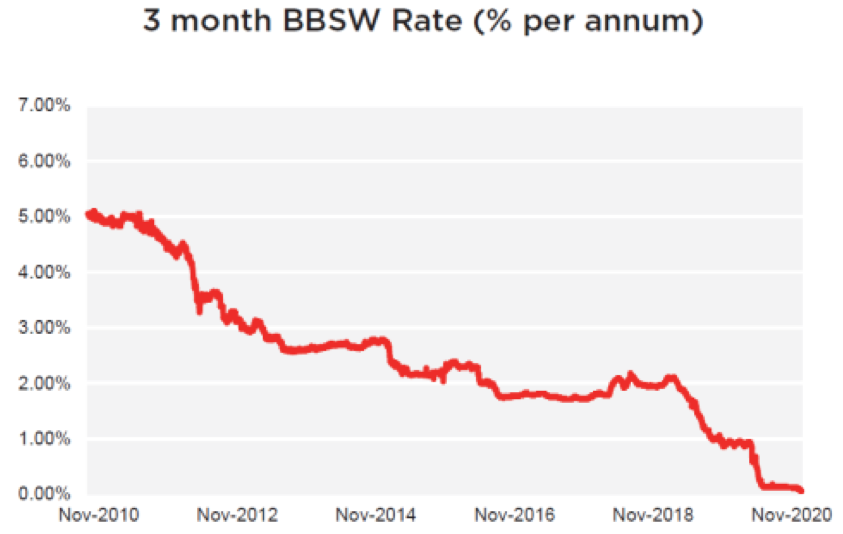 Against a 90 day bank term deposit paying 0.40%, the hybrid security rate of 3.45% looks quite attractive. Both are gross rates, so the relative difference is 3.05%. But what are the extra risks?

Firstly, hybrid securities such as bank capital notes have no maturity date or term. While they have a scheduled conversion or exchange date, a date typically 6 to 10 years past the issue date when the $100 capital note is to be swapped for $101 of bank ordinary shares, there is no guarantee that this will happen. It requires the then ASX market price of the bank’s shares to be at least 50% higher than the price of the shares when the capital notes were issued. For example, Westpac’s Capital Notes 7 have a scheduled conversion date of 22 March 2029. For conversion to occur, the price of Westpac’s shares in March 2029 will need to be higher than approximately $9.70 (current share price is $19.40). If the test is not met, it is re-tested each quarter until it is met and conversion occurs. Potentially, the test may never be met meaning that the securities become perpetual.

Secondly, in stressed circumstances, the regulator APRA can require that automatic conversion occurs. Known as “capital trigger” events, if the bank gets into financial difficulty and breaches a minimum capital ratio, or is declared to be “non-viable” by APRA, the capital notes are automatically converted into for shares. Because there is a cap on the number of shares that can be converted, there is a high probability that holders of the capital notes will  get less than $100 of shares and suffer loss as a consequence.

Distributions are not guaranteed. In fact, they are discretionary and subject to payment conditions. They are also not cumulative, meaning that if the bank misses a payment, it doesn’t have to make it up. There is protection from the discretion being mis-applied because the bank is then prevented from paying a dividend to its ordinary shareholders.

Finally, capital notes are traded on the ASX. They are subject to normal market pricing risks. There may not be a liquid market, or the trading price may be higher or lower than $100. An investor wanting to liquidate may suffer a capital loss.

Capital notes are priced according to their “trading margin” (effectively the market’s equivalent of the fixed margin). As can be seen in the chart below, this has typically been in the range of 3% to 4% over the last 13 years. But there have also been occasional blow outs, the most recent during the height of the Covid-19 market meltdown in March/April. At this time, some investors suffered massive losses by selling hybrids purchased for $100 in the seventies and eighties. While the market recovered just as fast, it does highlight the risks of investing in higher risk securities.

A final risk is that capital notes may be called early. This means that the bank decides to end the investment, and either converts the capital notes into shares or more likely, redeems the notes by repaying the $100. Call dates are typically 4 to 8 years after the initial issue date.

Many argue that this is not actually a risk but rather the expected or “hoped for” outcome. And in fact, almost all capital notes have been called at the first opportunity by banks repaying the $100, or giving holders the option of rolling over their investment into a new note. In the absence of any other information, the market prices the notes on the basis that they will be called.

The market is awash with new offers, with Bendigo, Westpac and NAB launching offers following smaller issues from BOQ and Challenger. The following table shows the details.

By historical standards, the margins on offer of 3.4% to 3.5% are reasonable, about mid-range of the long term trading margin. Not outstanding value, but attractive relative to term deposits rates.

The “jumbo” issues from NAB and Westpac are probably the pick. Although paying less than Bendigo, liquidity on the ASX will be higher and there is always a tiering between the ‘majors’ and the ‘minors”. Full details of NAB Capital Notes 5 are set to be announced on Monday following the completion of a bookbuild.

Should you consider investing?

Remember the old adage: “never invest in something you don’t understand”. If that applies to you, then don’t invest. If you want to learn more about hybrids, go to ASIC’s MoneySmart website and then read the Prospectus carefully.

And if you want an investment that is ‘capital stable’ or ‘capital secure’, hybrids aren’t for you.

If you are ready for an investment that is higher risk and can find room for it within the “risky fixed interest” component of your portfolio (remember it is income only, zero growth, but with a risk of capital loss), the current capital note offers are suitable.

Paul Rickard is the co-founder of the Swittzer Report. All prices and analysis at 20 November 2020. This information was produced by Switzer Financial Group Pty Ltd (ABN 24 112 294 649), which is an Australian Financial Services Licensee (Licence No. 286 531This material is intended to provide general advice only. It has been prepared without having regard to or taking into account any particular investor’s objectives, financial situation and/or needs. All investors should therefore consider the appropriateness of the advice, in light of their own objectives, financial situation and/or needs, before acting on the advice. This article does not reflect the views of WealthHub Securities Limited.