Why it’s a frothy market, but not a bubble

Why it’s a frothy market, but not a bubble

Sometime in early 2021, a little doubt entered the otherwise optimistic narrative shining on the stock market.

Legendary US fund manager, Jeremy Grantham, started the ball rolling when, in his GMO missive, entitled “Waiting for the Last Dance” he compared current equity market pricing to Japan in 1989, the 2000 technology bubble and the rally up to the Great Depression. He wrote:

“The long, long bull market since 2009 has finally matured into a fully-fledged epic bubble ... this bubble will burst in due time, no matter how hard the Fed tries to support it, with consequent damaging effects on the economy and on portfolios. Make no mistake – for the majority of investors today, this could very well be the most important event of your investing lives.”

Since the publication of Grantham’s memo, he has heaped more burning coals on the heads of bulls and optimists, during interviews in which he pointed out:

“this bubble is more impressive even than 2000, which was the champion. About 80% of the value measures have this one higher. We’ll be rather lucky to have this bubble last until May.”

A moment of maximum enthusiasm

Grantham has also cited the preponderance of stock market profit stories headlining the press, the frequency of speculative madness in stocks such as GameStop and Tesla, and the plethora of SPAC (Special Purpose Acquisition Companies) IPOs as evidence markets are in the final stages of the bubble, noting:

“The market tops out when the last bull has put his last money in. There is a moment of maximum enthusiasm, and the next day there’s plenty of enthusiasm but less than the previous day. So the buying pressure is released a little bit, like the famous water jets under the ping-pong balls. You turn the faucet down a little bit and the ball is still way up in the air, but it’s just dropped a couple of inches. It’s that process of slowly lowering the pressure, and the overpriced ping-pong ball slowly descends until it hits the proper level.”

More recently, Bridgewater weighed into the debate with their analysis of the popularity of growth stocks. Bridgewater identified that many of today’s largest companies share characteristics that originally supported a valid and logical investment thesis. That they have all used technology to leverage their margins and scale operations has led to the belief that all technology companies will enjoy the same success.

Consequently, investor capital has surged into any company holding the promise of similar success, irrespective of whether the probability of success is high or low. Of course, the issue with the 'all companies can succeed' mantra is that history doesn’t support it. A few will win but most won’t. According to Bridgewater:

“Only about 2% of stocks experience real annualised revenue growth of at least 20% for a decade. And, interestingly, that share has actually been on the low side for the last 10 years. And only a small share of about 5% are able to meaningfully expand margins by 15% or more. Doing both, as is currently discounted for around half of the [stocks in question], has historically been rare”.

In fact, Bridgewater suggests just 0.5% will make it.

As is common in the late stages of a boom, investors succumb to extrapolating the recent past, and in particular the experience of the FAAMGs (Facebook, Apple, Amazon, Microsoft and Google), into the distant future for all stocks.

According to Bridgewater, approximately half of the companies being priced to achieve extraordinary results are yet to even record a dollar of profit. Unlike the FAAMGs and others such as Salesforce, today’s tech hopefuls are less mature and generate lower revenues and margins.

An unassailable rule of investing is ‘the higher the price you pay, the lower your return”. Most tech hopefuls have starting valuations that are extremely high. Bridgewater calculates that in order to generate 8-10% returns, these companies will need to grow over 20% a year for at least a decade. And while they are growing by at least 20% per annum, they will also have to increase their margins.

Of course, some of these companies will achieve greatness. Picking the winner is not so easy and a bet on all of them is bound to destroy wealth.

FAAMG stocks are demonstrating business economics the likes of which the world has never seen before. Investors should own businesses with sustainable competitive advantages and ownership of FAAMG stocks is sensible. The most powerful competitive advantage is the ability to charge a higher price without a detrimental impact on unit sales volume and the FAAMGs have this.

Indeed, over the last five years, as these companies have increased in size, they have become even more profitable. As their equity has increased, so has their returns on equity. This is akin to an initial $1 million bank account earning interest of 10% per annum, then growing to $1 billion and earning a 25% interest rate. Clearly this is an extremely rare and attractive asset, and these are now the largest companies in the US with a combined market cap of US$7.7 trillion and strong price rises in the last year, as shown below.

Source: Dogs of the Dow

Additionally, during the first tech boom of 1999, the internet’s infrastructure was not capable of fulfilling the then aspirations of the internet hopefuls and their investors. Further, in 1998, there were only 150 million internet users. Today there are 4.7 billion internet users worldwide, yet it has reached only 59% of the world’s population implying a very long runway for further growth.

Bubbles in places but not entire market

Bubbles in some segments of the market does not mean the entire market is in a bubble. Nevertheless, paying a higher price - even for those companies that will succeed - will generate a lower return.

Nobel Laureate Robert Shiller channels the ‘high price, lower return’ aphorism when he points out the current second-to-record-high for his CAPE ratio may not accurately forecast a crash but it has done a good job predicting the annual return for the subsequent decade. At 35 times earnings, the best annual return that can be expected from the S&P500 index for the next 10 years is low single digits. 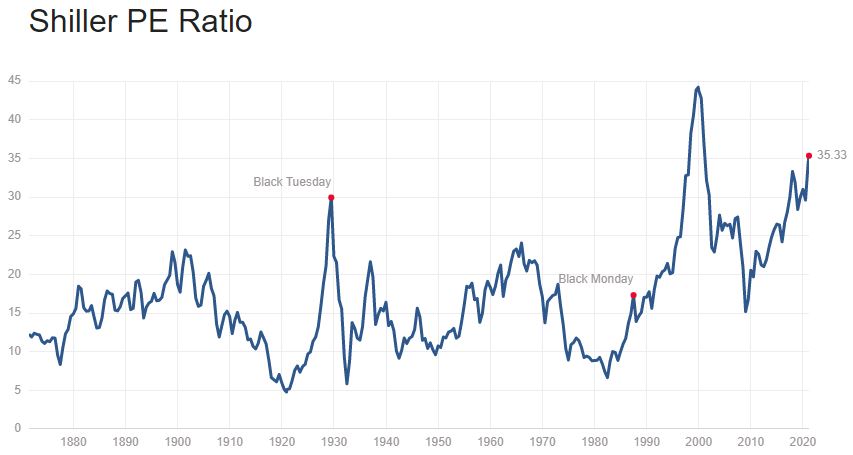 Here in Australia, the Future Fund’s house view is that most market scenarios are, over the longer term, pretty grim. In order to expect anything more, the Future Fund says an investor must believe:

Back to Grantham, his fears of a crash pivot to some degree on anecdotal observations about the proliferation of unbridled optimism in some segments of the market.

I would counter however that many of these bubbles have already burst without interrupting the market or its advance.

Last year, for example, bubbles formed in the shares of Hertz, Kodak and Nikola. These stocks rallied between 500% and 1500% in just a few months. They crashed by 85% in even less time and yet the market was not interrupted. Similarly, Bitcoin crashed by the same magnitude in 2018 and the stock market went on its merry way.

My view is that bubbles can form and deflate in blissful isolation provided the assets busting aren’t held, in any significant proportion, on the balance sheets of systemically important financial institutions.

Yes, the market is expensive overall. Shiller’s CAPE ratio confirms this. But low interest rates justify higher valuations, and a quarter of the market is made up of businesses with economics the likes of which the world has never seen before. That there are pockets of rampant speculation is undeniable, but bubbles have burst recently without disrupting the broader market’s advance.

The only valid argument for a major pullback in markets is the steepening of the bond yield curve. Rising bond yields act like gravity on the intrinsic value and prices of all assets including equities. The increase in 10-year bond rates recently has already had a significant impact on the present value of dollars earned in the distant future, especially long duration growth stocks – those currently making no money but expected to in the distant future.

Any further steepening of the bond yield curve - whether because central banks have failed to manage the curve through Quantitative Easing, or because inflation emerges as a genuine concern – will have real world impacts on the market valuations of those growth stocks.

Jeremy Grantham is right to warn investors of the bubbles in these types of stocks, but a broad share market crash would be entirely coincidental. A watchful eye should instead be kept on the yield curve as it has real world consequences and a traceable cause-and-effect.

A free subscription for nabtrade clients is available here.