Australia’s equity market performance versus global markets has waxed and waned over recent decades. A key driver of relative performance has been global sector performance, in particular, technology versus mining stocks.

As the chart below shows, Australian relative equity market performance has been through several marked cycles in recent decades. In the late 1990s, the local market tended to underperform. It then enjoyed a sustained period of outperformance from the bursting of the global dotcom bubble in 2000 until the end of the GFC in late 2009. Since the GFC, the local market has once again tended to underperform.

By contrast, when Australian equities have been underperforming, the Australian dollar has also tended to fall, which has added to global equity returns in unhedged, $A terms. This is a vital distinction. 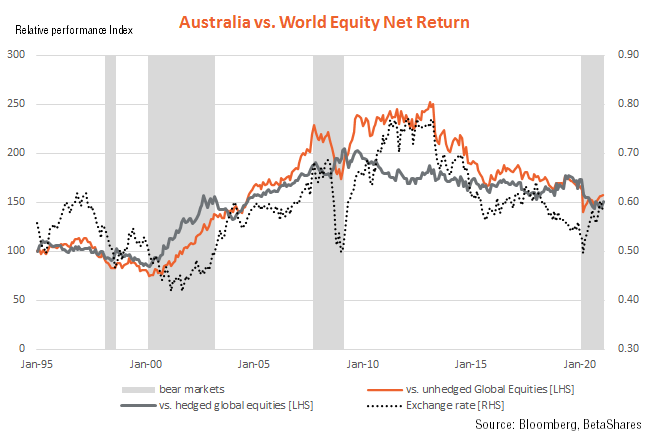 Why has Australian relative equity performance shifted over time?

As seen in the chart below, and at the risk of oversimplifying, a major driver appears to be the relative performance of the global technology sector versus the global mining sector. When technology has outperformed (as in the late 1990s and since the GFC), global equities has also tended to outperform. When the mining sector has outperformed (as during the noughties China-driven commodity boom between the dotcom bubble and the GFC), Australian equities has also tended to outperform. 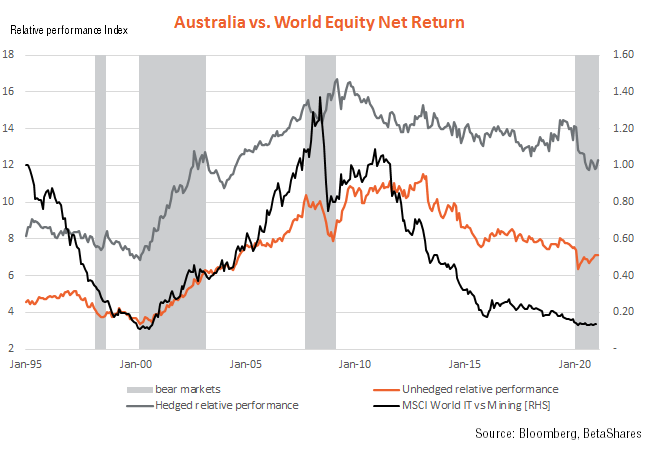 As seen in the table below, over the past year, Australia’s market has been broadly flat whereas global markets (in hedged or local currency terms) have risen a solid 15%.

Across sectors, the biggest drag has been technology, due to the industry mix rather than competitiveness effect. In particular, although local tech stocks did even better than their global counterparts (48.8% vs. 42.2%), local performance suffered because our listed technology sector is relatively small by global standards (a market share of 3% vs. 19% globally).

Financials were also a drag as Australia has a relatively high weight in this global sector which has performed poorly over the relevant period). Other notable drags were industrials and health care due to competitiveness effects – our local sector underperformed their global peers. The healthcare drag may reflect the relatively good performance of leading global vaccine companies, and recent strength in the $A which has hurt offshore earnings of local companies like CSL.

Of course, all this begs the question: which will be the dominant global thematic over the next few years? Are we about to enter an inflationary commodity ‘super-cycle’ based on a synchronised rebound in global economic growth, which could expose commodity supply bottlenecks following years of low prices and an under-investment in new capacity? This appears to be the commodity bull case.

Or will the disinflationary global technology boom – largely in place since the GFC – continue to prevail?

My judgement is that the latter, rather than the former, will remain dominant, although commodities/resources could enjoy a short-run post-COVID bounce.

After all, commodity prices have been in a long-term downtrend, which has occasionally been interrupted by the emergence of a new industrial superpower, such as China most recently especially after its entry into the World Trade Organisation (WTO) in 2001. There’s no new industrial superpower on the horizon that will have a similar voracious demand for raw materials.

Meanwhile, the technological revolution, encompassing growth in robotics and the shift to cleaner energy, still appears in its early stages, which could see ever greater efficiency in the use of today’s popular raw materials.

Innovation will also continue to allow corporations to slash costs, which should keep inflation low, much to the misplaced concern of today’s central bankers.

Of course, I’ll be watching should trends prove otherwise. If I’m right, I suspect Australia’s ability to outperform global peers will remain somewhat challenged given our relatively low exposure to technology stocks and higher exposure to financial and resource-related stocks.